Celebration in Molise: The spring season is for the Molise region the right period to celebrate fascinating old traditions that glorify nature and animals and religion as well. During all this festivals it’s possible to feel the joy and the vivid sentiments which animates all the community. You can learn how concrete and tangible the meaning of the word “tradition” can be. The fiercely-guarded customs and rites which are repeated every time the festival comes around, convey the history of the community and marks its uniqueness.

Here is a short list of the most important festival that take place from May to August and, if you have the chance to come to Molise, you can’t miss! 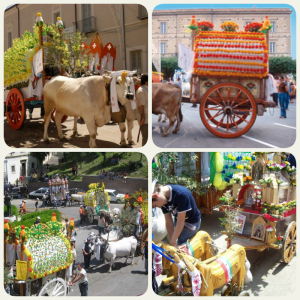 This big festival in honor of the patron of the village Saint Pardo consists in a suggestive parade of approximately 130 wagons (each one represent a family) that are on tow by oxes. All the wagons are decorated with flowers, ribbons made with paper, fabrics and blankets and are prepared by all the members of the family from the youngest to the oldest member.

The celebration starts with the blessing of the wagon  that will, the next days, cross all the village in a suggestive parade that take place until the night.  This parade is followed also by the statues of Saint Pardo and the effigy of Saint Primiano.

June: Corpus Domini in Campobasso with the festival of  “I Misteri” 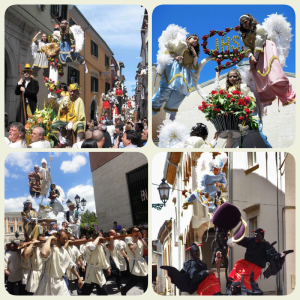 The festival of I Misteri is one of the most famous celebration in the region. It takes place the day of the Corpus Domini (a christian celebration established in 1264 by the Pope Urbano IV) and consists in a parade of the 13th mysteries of the Bible. Each machine is an allegorical portrayal of the mystery where children and adults are anchored to steel and wooden structures and they seem to float in the air. This machine is supported by at least 12 people. This parade starts from the homonymous museum and crosses all the city center.

The most suggestive celebration in Molise during spring and summer period 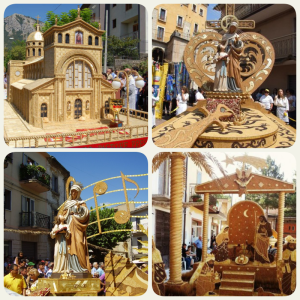 The wheat’s festival is the thanksgiving in honor of Saint Anna for this precious product of the earth: the wheat.

Group of people or families decorate wagons (traglie) with the grains and ears of wheat, and create a stunning and symbolic drawings that, during the parade, are accompanied by people wearing the traditional clothes. 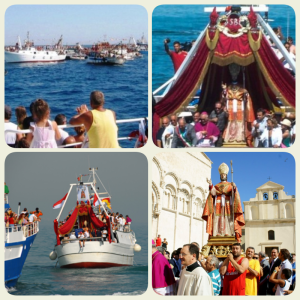 Saint Basso is the patron of Termoli and its celebration is very particular: the statue is carried in procession on a boat and followed by the faithful on fishing boats. When the boats reach the port, the procession continues in the valleys of the old town center until the cathedral.

With this festival the population is asking to Saint Basso the protection against the dangers that can occur while fishing and a good luck for the fishing.

You need to log in to use member only features.